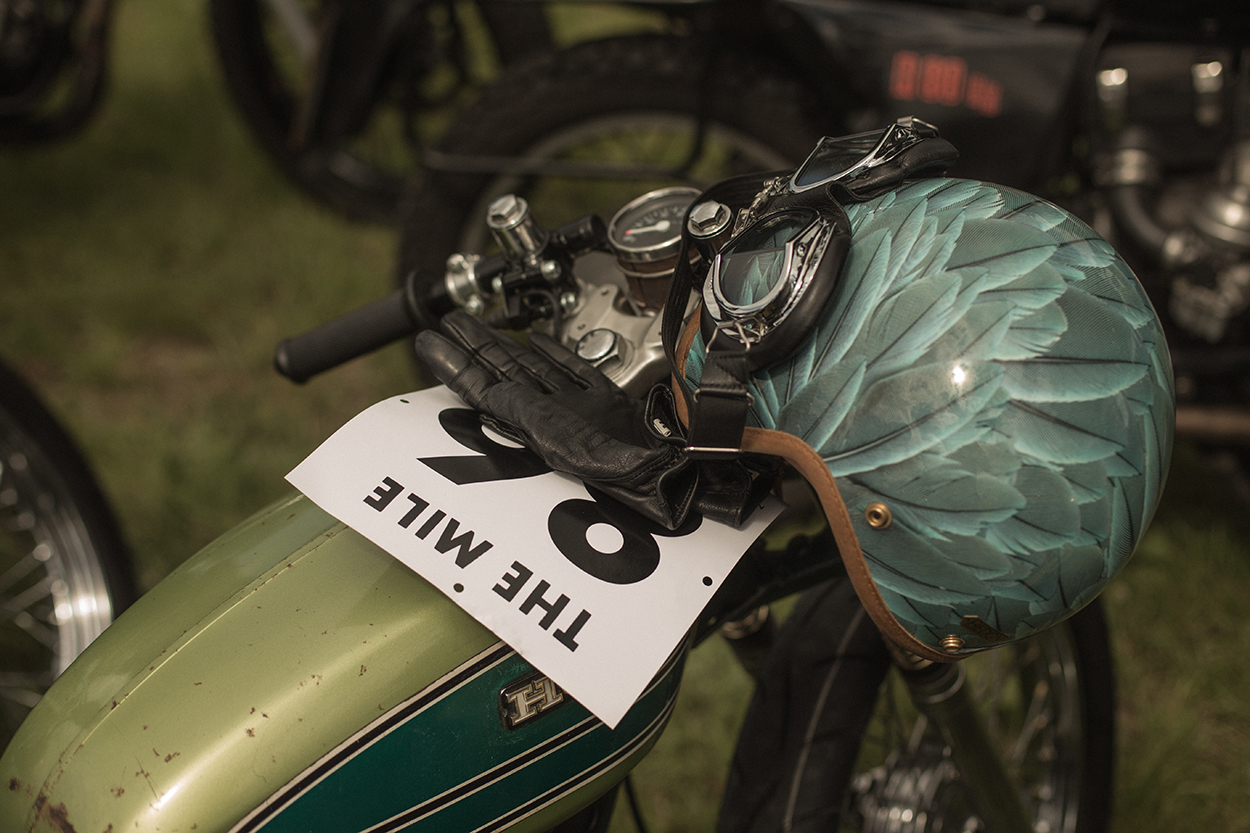 While packing things ready for the Malle mile, I set my alarm for the morning and faffed a lot, I wondered how I was ever going to get some sleep.  I felt like a kid again, Christmas had come early and I was the most hyper I had been all year (anyone that knows me will be glad they didn’t stay over).

It was my first time racing and without any former training, I was a little nervous. I may end up stacking it, which to be honest wasn’t really an option in my mind as the bike wasn’t mine.  I was racing my bikes sister bike- ‘Lil Bogey’ a Honda CB125, (sorry to disappoint all of you who thought the bike was mine) the boys at Rebels Yard had done an amazing job on her!  Sitting strong with the original 1973 green rusty tank, custom painted tailed end to match, clip on bars and bored to 190cc and I could really feel that extra power beneath me!  What a dream, the gear change was like nothing I had felt before, super smooth like melted butter seeping through your boot and in-between your toes. So without much sleep, my friend Tom and I made our way to Bolt Motorcycles. I had heard there was going to be quite a few bikers gathered there for breakfast, ready to ride out to Kevington Hall where the Mile was being held. I don’t think I realised just how many bikers there would be!  As I pulled up I was so over whelmed, my adrenaline kicked in and that excited child inside of me bounced around like it had just downed five bags of popping candy. With not much time to take the snaps I wanted, a shout from Andrew to make a move then turned into an uproar, the whole street sounded like how I imagined it would be to be inside of an engine, a jungle of noises like a domino effect rumbling along the entire side walk, enough to move the street to the other side of London. God those poor people hoping to sleep in on a Saturday morning- clearly zero fucks were given! The journey down there had been a fun one, my time to test out the bike and open her up full throttle to see how she handled.  I was in a haze, surrounded by so many other bikers, that adrenaline just kept soaring- a sign of things to come.

Once we had arrived at the location, the growl of bikes and a few classic car engines echoed down the graveled drive way. It was time to get signed in and get ready for the Hill climb, for those that were racing it. No messing, time was upon us (as per usual arriving with time to spare wasn’t an option).. Already sliding sideways down the now loose, dark and heated stoned hill that approached the main site, I took it easy (although probably a good place to practice your control) I was now entering the main campsite, side on, tail end out.

In no amount of time The Hill climb was upon us.  Gathered in the pit with Jonny and Robert (Malle) and Calum (Debolex) handing out the rules of the race. Once given the go ahead all the racers jumped on their bikes, filling the pit in a cloud of fumes, the smell was unreal, the sound was deafening and every face I pinpointed through my viewfinder had a huge smile stamped hard from ear to ear… I was happy to be a spectator, running around like a looney taking photos, watching the mud fly high in the air, racers on custom bikes and classic’s all in a genre of their own. It was immense; spirits were high and the ground was slowly churning in a dance of its own, mud and grass being tossed up likes a hairy biker salad if there were ever to be such a thing. An hour or so to burn in-between races and the bipolar English weather testing us as usual with it’s confusion, as to whether it was apart of the monsoon season or a California pool party? It didn’t stop racers taking the chance to participate on the ‘malle petit moto’. A monkey bike prepped to tackle a mini trails course designed by the malle boys. It was a lot fun watching others take it on in style, or for some going completely of course, face down and clogging it up with a clump of grass, almost to the point it wouldn’t run. I of course started the track tackling it with a spinning pirouette, revving too hard and spinning around along side the bike. Oppps. Once back on track I made my way around the course with the two occasions my feet touched the floor, adding on extra points to my time. Happy that I made it round and didn’t bin it, my mind was then pressed back to the race ahead with only half an hour to prep. ‘Lil bogey’ warmed up and ready to rumble, I lined up with the masses for a test of the mile. After a couple of laps it was time to team up against a worthy opponent. I found myself alongside Andrew from bolt on his 1969 Lambretta GP, not far off my engine size, his being a 186cc. I felt better about not being eaten up by the bigger machines that prowled around me. As I pulled up to the start line I put on my rebels race face and settled in to neutral. With my right hand pulling heavily on the throttle, my left hand steady on my helmet ready to swing down to my clutch and drop in to first gear… the flag went down with an energetic jump and a swoosh from Kiki my partner in crime – I slammed down into first and left her behind screaming in my hear, all went silent in my mind, the crowd disappeared and It was just the straight track ahead, a small kick off the dirt, then sliding into second followed by a few bumps along the way. Just as I kicked into third I was over the finish line, beaming bright, heart belting, I knew I had won. The following two races pushed my need for speed, up against Ben from LCC on his Yamaha Chopper 650, and boy it was a close call, we still don’t really know who crossed the finish line first? The final heat was a clear win, Unfortunately all I know is I was up against a 250 Honda and the guy couldn’t get the bike into gear, so fortunately for me I was through to the knock out round after the customs had there time. The overall result after the elimination round was Olllie Reimainn on his XT500 taking man of the mile. Extremely excited to see a fellow friend and a bike so easy to fall in love with win, made my heart warm and the excitement grow, a momentous moment. Screaming and cheering, we all went nuts. It was 100% euphoric. A complete high and he absolutely smashed, so much so at one point he even had time to give the middle finger to his opposing racer, no hard feelings hey. While I left pretty chuffed with the fact that I got trough one more round, winning against a fellow Honda 125 scrambler but knocked out in my final fifth round by a admirable opponent- Harry on his Honda Cub110 4speed- one of my dream mini motos already on the list. The race was by far my favorite. Getting off to a not so great start, I span in the mud while Harry took off fast, almost half way and I’m still there with my tail end having a hissy fit and kicking out massively to the right before I slot the gears into second, creeping in on him at flying speed. He reached the finish line just as my head had passed his little tooshie. That really did get my blood pumping.

What really made the day for me, was the amount of support everyone gave out, racers and supports alike. Even though people had their competitive streak, we all still remained friends and there was no hard feeling… I’m still completely buzzing from the weekend and can’t wait to see what bikes everyone produces for next year. Inspiration is soaring high and massive congratulations to those that worked hard to get the bike race ready.

Here’s hopping I didn’t babble too much and you enjoyed the day from a super stoked not green with envy 1974 classic café bikes point of view.  I’m just a girl that apparently has oil in the blood.

For those of you who stayed, we all know what went down at the after party and for those that didn’t you’ll need to do some digging to find out .

Massive congrats and thanks to the malle boys for and excellent 2nd series of the Malle mile. 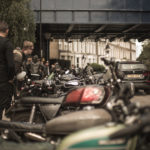 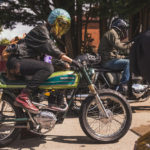 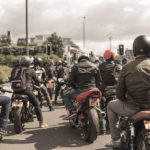 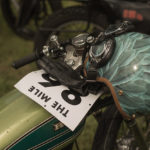 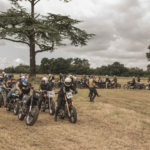 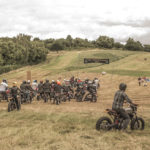 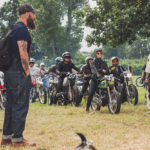 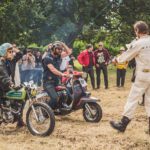 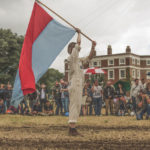 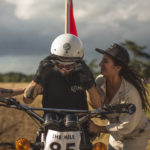 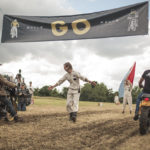 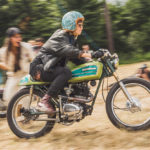 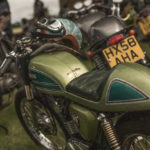 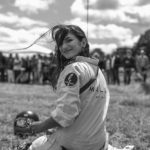